ReWild is an alternate reality game combining enigma and hiking or biking, on the edge between virtual world and reality. It was launched in the summer 2012 and played until September 2015.

It aimed at developing hiking activities among young adults in the French mountains of the Rhône-Alpes region and to increase the territorial attactiveness of the natural parks involved in the project. The age of the core target was between 18 to 25 years.

Based on the initiative of the association Grande Traversée des Alpes including four natural regional parks (Bauges, Chartreuse, Haut-Jura and Vercors), this game has been designed and realized by Interactive 4D. ReWild was the first outdoor game in France to extend over such a large territory : the four regional parks of Bauges, Charteuse, Haut-Jura and Vercors as well as the cities of Chambéry, Grenoble, Aix-les-Bains and Bellegarde-sur-Valserine.

As a transmedia quest game based on many interconnections between the real world and a virtual one, ReWild used a large range of different media :

• Interactions between the real world and fictional characters (via sms, phone messages, emails...)

• Videos giving life to the characters and the scenario, ensuring a continuity between the real world and the virtual one

• Community management in interaction with the players

• Interactions with real characters during events ...

September 17th 2014: ReWild wins the European Trophy TheALPS Awards 2014 ! On the theme " Innovative Strategies of digital communication in the alpine tourism", a jury of European experts in tourism and digital marketing rewarded the game ReWild among thirty candidates.

June 25th 2013 : 7 minutes TV report on France 3 Bourgogne about ReWild in the regional park of Haut-Jura.

January 2013: the season 2 of ReWild is in preparation ! Following the success of season 1, Interactive 4D is now working on a promising new season : new smartphone application, new scenarios and new alpine paths in the four regional parks of Bauges, Chartreuse, Haut-Jura and Vercors as well as in the cities of Chambéry, Grenoble, Aix-les-Bains and Bellegarde-sur-Valserine. Stay in touch for the launch in the early summer 2013 !

November 26th, 2012: The game ReWild has been awarded twice at the "Trophées Innovation et Tourisme en Rhône-Alpes" by the Regional Committee of Tourism (Rhône-Alpes Tourisme) : with an award in the category "Digital tools for the discovery of territories" and with the Jury's "all categories" Award.

October 2012 : the game ReWild is nominated for "Innovation and Tourism Awards in Rhône-Alpes" organized by the Regional Committee of Tourism (Rhône-Alpes Tourisme) in partnership with the Rhône-Alpes Region.

May 19th, 2012 : click on the image below to read the article about ReWild in the local newspaper "Le Progrès": 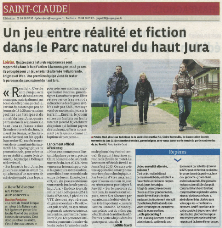